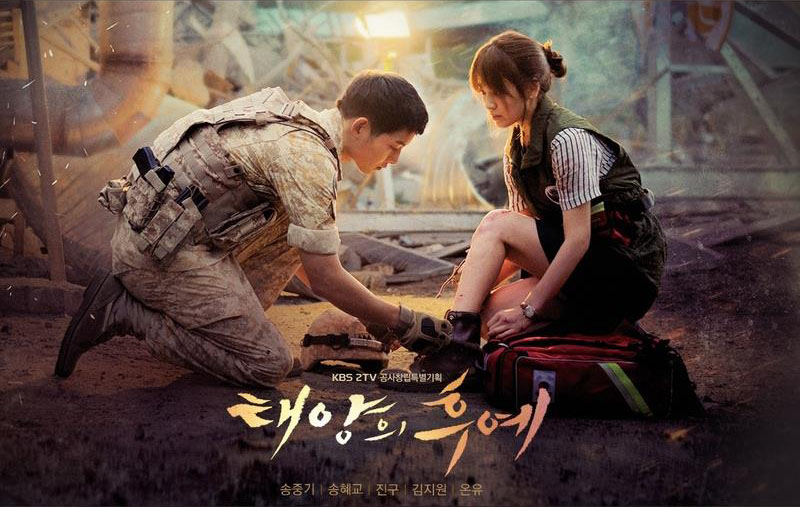 KBS’ latest romance drama “Descendants of the Sun” is setting a new history both in Korea and China. The 16-episode drama starring stars Song Joong-ki and Song Hye-kyo is poised to become the next hallyu (Korean wave) success after a nearly two-year void since the hugely popular SBS drama “My Love from the Star.”

The sixth episode posted a 28.5% viewer rating, which broke surpassed the previous record viewer rating of 28.1% set previously by the last episode of “My Love from the Star”.

In China, “Descendants of the Sun” has reached 440 million views on Chinese online video platform IQiyi. Chinese online media outlet Sina, describing the drama’s growing popularity in China, said that “Descendants of the Sun” has become the most-mentioned Korean drama on social media, comparing it with “My Love from the Star,” which starred Jun Ji-hyun and Kim Soo-hyun.

Local industry watchers say that the drama’s success has more meaning beyond skyrocketing viewer ratings. Unlike other Korean dramas, where scripts are issued just a day prior to filming and editing is left until a few hours before the episode is due to air, this drama has adopted “early filming.”

For this drama, the greater part of the shooting took place, or will take place, before the first episode airs, or is set to air. Beginning filming early for a TV series is convenient for the producers and actors, because the actors don’t need to pull all-nighters and can buy enough time to understand and build a character, while producers also have the time to make sure every scene is of high quality.


Local networks had tried “early filming” before “Descendants of the Sun,” but they were mostly unsuccessful. Early filming increased costs, being completed before the sales of the drama were guaranteed, which could drive production firms to bankruptcy.

It has been said IQiyi paid nearly $250,000 to $300,000 for each episode, before filming began. The precondition for the purchase was that the show would be broadcast in China nearly simultaneously to in Korea. Each episode in China is aired to paid viewers one hour after airing in Korea.

The near-simultaneous broadcast was mostly possible because of early filming and because China regulates Korean drama imports, with each drama going through a preliminary review to be aired there.

© Copyright 2016 - BuzzWav 潮報
We use cookies to ensure that we give you the best experience on our website. If you continue to use this site we will assume that you are happy with it.OkNo